In an effort to better serve the Horizontal Directional Drilling utility drilling sector, HDD Jet Nozzle is scheduled to release the Series 45 in September- October 2014. Fashioned after the popular Series 65 design, the Series 45 includes a three-part assembly, e.g., interchangeable tungsten carbide nozzle, threaded retainer, and a nozzle socket (weldment). The overall dimensions have been reduced in order to better fit in-hole tooling being used by the HDD utility drilling sector.

The smaller orifices of the S45 are specifically designed to accommodate drilling spreads having smaller pumps and/or applications where less drilling fluid volume is desirable while back reaming without sacrificing velocity and pressure across the nozzle.

An added feature of the S 45 carbide jet nozzle is an internal profile, incorporating a concave blending radius designed to help compress fluid as it passes across the nozzle, thus enhancing the velocity of drilling fluid as it exits the nozzle. Increasing the velocity of the drilling fluid injected at the drilling face at or around the mechanical cutters, can significantly increase the performance of the HDD tooling, thus increasing the rate of penetration (ROP) resulting in a cost savings to the HDD contractor.

The Series 45 threaded nozzle retainer is independent of the carbide inserts and will accept any of the S45 tungsten carbide nozzle inserts. This design is cost-effective ways to change and adjust nozzle orifice sizes as required when formation and/or drilling condition change. 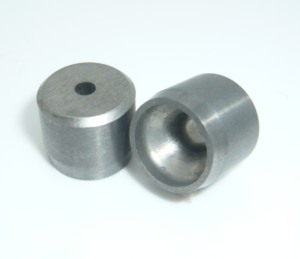 In addition to higher pressures aiding in the cutting of the formation, higher velocities and pressure across the nozzles will increase the efficiently in shearing formation as it is cut, thus

reducing the size of the cuttings so they can be more efficiently carried out of the borehole while entrained in the bentonite slurry. More information on the benefits of high pressure nozzles can be found at “Jet Nozzles an Essential Part…” .

Extensive studies within the oil and gas drilling industry clearly demonstrate that properly placed, high pressure jet nozzles will greatly increase the efficiency of mechanical cutters thus increasing the contractors ROP and reducing the risk during pullback associated with non-sheared solids that have settled out within the bore-hole. 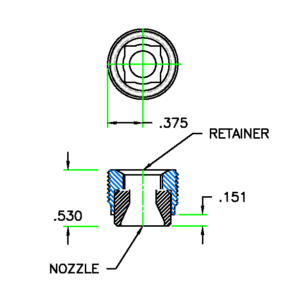 For more information on the Series 45 high pressure jet nozzles contact us today and let us assist you in your next jet nozzle needs.