Recently, while spending a bit of time on social media (as it pertains to HDD Horizontal Directional Drilling), I found myself looking though photographs posted by various people in the HDD industry. What I found in respect to HDD reamers and a hole-opener design was quite surprising!

With all due respect to manufacturers and/or builders of the hole-openers referenced in this article, there appears to be either a lack of understanding or worse, blatant disregard for the importance of use and placement of high pressure jet nozzles by some companies offering HDD hole-openers and in-hole tools.

One of the reasons I was so taken aback by this, is my in-depth understanding of what it used to be in HDD contractor, after owning and operating as a HDD contractor for over 40 years. If there’s one thing that I clearly understand, it is that profit is directly tied to time and money. The less efficient and more time consuming the hole-opening operation, the higher the cost, and less profit at the bottom line. 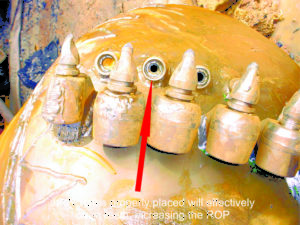 Condition of teeth after a single 8”to 38” X 1100M pass in granular abrasive sand formation.

What I found while reviewing many of the hole opener designs, is that the nozzles (and in some cases no nozzles, just drilled holes) were positioned

around the hole-opener primarily to inject fluid into the borehole, with little or no consideration for cleaning and aiding in the efficiency of the mechanical cutter(s), e.g. pick teeth, blades, etc.. In fact, I was somewhat shocked at how many hole-opener photographs I came across, where the nozzles were actually placed behind the cutting teeth or just randomly placed around the leading end of the hole-opener.

One can simply look at the positioning of any given nozzle and ask yourself, “how does the high pressure velocity exiting this nozzle, help increase the efficiency of the mechanical cutters (teeth) and increase the efficiency of the hole-opener?” By asking yourself this question you can quickly start to identify less efficient hole-opener designs.

Whereas these types of designs will certainly inject drilling fluid into the borehole, they do very little to clean formation from the leading edge of the cutter, causing the hole-opener to be less

efficient, while slowing the rate of penetration (ROP) and costing the HDD contractor valuable time and money.

Ideally, the high pressure and velocity flow exiting the jet nozzle(s) should be directed across the leading edge of the mechanical cutter, unloading the cutting surface, and preventing formation from building and compacting against the leading edge of the teeth. A nozzle that is washing across the face of the cutter ensures maximum efficiency of the hole-opener teeth as they mechanically gouge, cut and/or dislodge the formation. 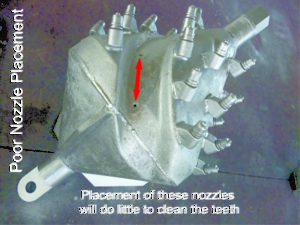 Another significant factor that should be taken into consideration when evaluating HDD hole-openers and the positioning of their jet nozzles, is the jet nozzles ability (and efficiency) of shearing the formation as it is being cut. By efficiently sharing the formation you are ensuring that the cut formation is being broken down into as small of particle sizes as possible, so that they can be entrained in the bentonite slurry and carried out of the borehole. The smaller the particle size of the solids, the less likely it is to settling out into the bottom of the borehole ensuring that it carried out of the borehole within the bentonite slurry.

This is a consideration that is even more prevalent in clay formations, as clay has a tendency to slice in larger pieces, falling behind the hole-opener blades and settling behind the advancing HDD Reamer, settling out at the bottom of the hole. For this reason we have long since stopped using blade and fly cutter reamers, in clay formations, substituting the Fly Cutter Reamers, for barrel reamers designed with added jet nozzles with smaller orifice sizes to increase the pressure and velocity for shearing of the clay.

I understand and accept that there will always be those that will downplay the significance of high pressure nozzles, their placement, and the impact that a properly designed hole-opener will have on the success of any HDD crossing. But for those not having the benefit of 40 years of success and failures while performing HDD crossings, I can assure you that it is significant. Over this time I have watch the industry evolved with the focus changing from bigger in larger HDD machines in the early 70s to smaller HDD machines of less capacity while at the same time achieving further reach, larger diameters, more complex trajectories, a result of evolving and improved in-hole tooling and methodology. Straighter, cleaner, more efficient hole-opening practices and procedures have had a much greater impact on an evolving industry than the surface machinery used to perform these crossings.

The topic of HDD Fly Cutter Reamers vs. HDD Barrel Reamers will be covered in a future article.