Shortly after the development and introduction of HDD in early 1970 it became the quickly became clear the importance of hole opener design and the use and placement of high pressure jet nozzles.

It is sometimes difficult for those entering the HDD industry today to fully appreciate the failures, and subsequent successes that were part of the evolutionary process that have evolved into hole opening methods and procedures commonly used in the HDD industry today. Whereas in-hole hydraulics and hole cleaning practices were well know in the Oil & Gas sector it proved to be far more difficult to carry cuttings out of a shallow surface to surface borehole then a deep vertical well. It was quickly understood that the same procedures and practices did not always apply to cutting and moving large volumes of solids horizontally through a (relatively shallow) borehole, to the surface as required by HDD. Essentially vertical Oil & Gas bore holes relied on lifting cutting (solids) vertically (or near vertical) to the surface in a relatively small diameter column of drilling mud. With the proper drilling 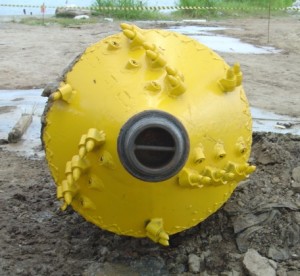 medium, viscosity, and flow rate, solids were entrained in the slurry and lifted to the surface through [1]laminar flow. A common practice in Oil & Gas drilling was (and is today) to perform what is referred to as pumping “bottoms up”, the continuous circulation of drilling fluid, lifting the cutting from the bottom of the hole to the surface before the pumps are shut down for any extended periods of time. In simplified terms, cuttings are being raised in a fluid conveyor as they move along with the flow of bentonite to the surface. Removing cuttings from a HDD borehole can be far more complex when the cuttings (solids) are not entrained in a vertical column thousands of feet in depth. The vertical distance that solids can settle before they reach the bottom of the hole and become stagnant is the diameter of the borehole, a distance that is measured in inches not thousands of feet. Solids that settle to the bottom of the borehole are far more difficult to re-suspended and move out of the borehole than those that are entrained in the bentonite slurry. A very high percentage of pipe pull back failures are associated with solids in the borehole, most of which are cuttings that have settled out of the bentonite slurry. The rate in which the cuttings settle (slip) are based on two primary factors, the viscosity of the bentonite slurry in which they are entrained, and the size and weight

(mass) of the cuttings. Bentonite that is to viscous requires too much pressure to keep it moving along the column especially when the column becomes static when the pumps are shut down b

etween joints. When in-hole pressures exceed a certain threshold the formation fractures and returns are lost. Too light of viscous and the cuttings will quickly settle to the bottom of the borehole and becomes stagnant. With the above said, bentonite viscosity has a relatively narrow range in which it can (or should) be adjusted, making the size of the cuttings (solids) an essential consideration.

The size of the cuttings can be affected by many factors e.g. penetration rate, hole opener design and high pressure jet nozzle placement. 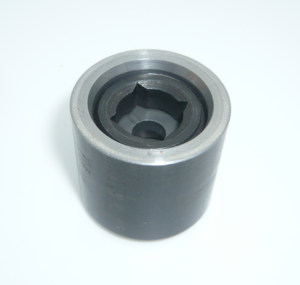 As part of our ongoing commitment to design drilling solutions for the HDD and vertical drilling industry, we have developed and are offering a nozzle assembly that offers a standardized solution to most in hole tooling requirements. The series 65 assemblies are ideally sized and suited for most drilling applications, allowing contractors a standardized nozzle solution for all of your high pressure jet nozzle needs. Nozzle sockets can be mounted flush or counter-bore (flush mount) into drilling tools allowing for serviceability of these tools having a wide selection of nozzle variations. Not only are these assemblies a central part of building in-hole tools e.g. hole-openers, fly-cutters, barrel reamer’s, hole cleaning swabs and jet bits, etc. they are also considered essential for any HDD contractors to have on location for any type of high pressure applications including but not limited mud tank jet guns, mud pit agitation (breaking up solids), wash down tools, etc.

[1]   laminar flow (lām’ə-nər)  Smooth, orderly movement of a fluid, in which there is no turbulence, and any given sub current moves more or less in parallel with any other nearby sub current. Laminar flow is common in viscous fluids, especially those moving at low velocities.

For more on laminar flow