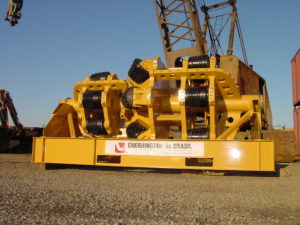 HDD Jet Nozzle Assemblies have recently been incorporated with great success into new hard rock, hole-opener designs and shipped to South America for a series of very demanding HDD projects. The hole-openers were designed and manufactured by Cherrington and on a South America collaboration that involved opening HDD holes to 52 inch in diameter, in formations that were predominantly basalt with high percentage of quartzite that proved to be extremely hard and abrasive.

Due to the extremely hard and highly abrasive nature of the formation, the hole opener design incorporated roller reamers (both ahead and behind the primary cutters) that both supported the weight of the hole opener while being operated horizontally within the borehole, as well as ensuring that the borehole did not go under gage, a condition that can be detrimental to the hole-opening operation.

The Series 65 nozzle assemblies were selected offering a standardized nozzle solution throughout the project. Originally used in the oil and gas sector, the 65 series has 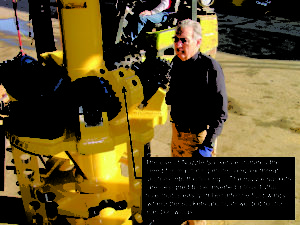 proven to be a successful platform when designing a flexible and adaptable nozzle assembly that could be incorporated into a multitude of HDD applications.

Early on in the design process it was decided that the hole-opener fluid injection wings would not be machined to accept a standard S65 nozzle retainers and that alloyed Nozzle Sockets would be incorporated into the design. The use of nozzle sockets eliminates the need for machining more complex threat profiles into the tooling, thus reducing costs, while at the same time offering a more serviceable approach. The nozzle sockets are designed to be inserted into a 1.250” hole that is easily drilled into the fluid wings, where the sockets are flush welded to the injection wings. By using this approach, hole-opener that requires service involving damage nozzle threads, sockets can be easily replaced, in or out of the field. 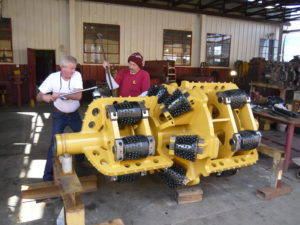 In the case of these hole-openers used in hard rock formations containing a high percentage of quartzite, maximum flow rate was desired in order to flush highly abrasive cuttings out of the borehole. To accomplish this, the hole-openers were fitted with #16 (.500) nozzles that allowed over 700 GPM to be pumped across the cutting face, flushing the cutting away from the cutters and out of the borehole, avoiding excessive wear on the tooling.